After setting a goal to reach $50 million in total donations in honor of Windermere’s 50th anniversary, the Windermere Foundation is getting closer to reaching that goal thanks to the $1.5 million that has been raised so far this year. After ending last year with a grand total of over $46 million in donations, that leaves roughly $2.5 million to hit our goal by the end of 2022. Here are some recent examples of how our offices have been raising money and helping low-income and homeless families in their communities via the Windermere Foundation.

The Windermere Wedgwood office was inspired to support Lutheran Community Services—a local response organization helping refugees to find stability in the Pacific Northwest—after learning that they needed help raising money to support incoming families of Afghan refugees. After discussing the situation with Windermere Foundation Representatives from the Northgate, Sand Point, Madison Park, Eastlake, and Ballard offices, they got to work spreading the news and gathering donations. Support poured in, and when a check for $15,125 was presented to LCS, there were tears of joy.

For the past ten years, the Windermere Coast offices of Gearhart and Cannon Beach, Oregon have participated in the Autism Society of Oregon – Clatsop Chapter’s 5k race/fundraising event “Color the Coast for Autism” as a way to support families with children on the autism spectrum. This year not only did the offices participate and donate $1,000, but they placed well in the race, too! Agent Katy Walstra Smith came in first place for the 5k relay, with two other agents placing inside the top 20. 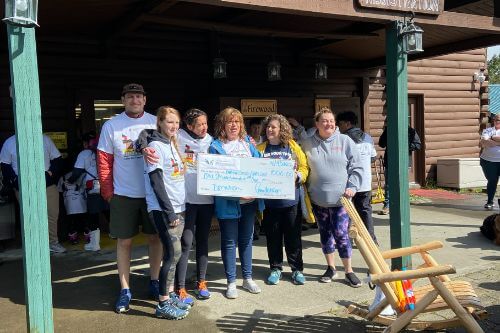 The Windermere Bozeman-Downtown office continues to support and spread goodwill throughout the Bozeman community. In April, they hosted a Windermere Week of Giving for five local organizations that resulted in $1,000 donations to each.

Their donation to Thrive will go toward hiring mentors for two children for an entire school year. The funds allocated to Eagle Mount paid for some of the production costs for their largest annual fundraiser, which the Bozeman staff helped put on during Community Service Day 2022. Their donation to Haven will be used to provide resources to victims of domestic and/or sexual abuse. Family Promise plans to use the funds to support families experiencing homelessness in Gallatin County. And the donations to HRDC will go toward the establishment of a new facility to provide resources and solutions to people experiencing poverty in the area. 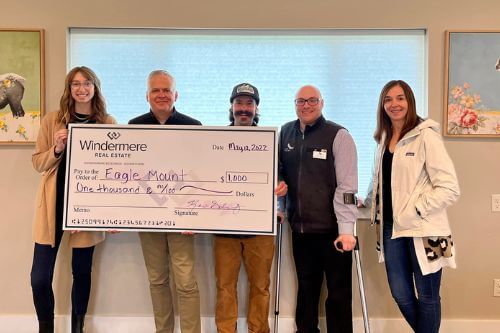 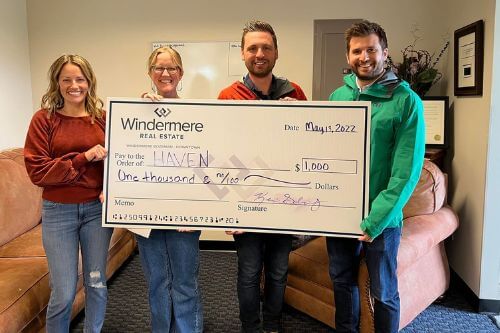 Every year, the Windermere Mercer Island office hosts a shredding event which draws crowds of clients and community members alike. This year, they hired a local shredding company to bring a truck to the office parking lot and invited the community to safely and securely shred their old documents while getting a chance to meet some of their fellow community members. The event also served as a platform to collect donations for and raise awareness about the Windermere Foundation’s 50 in 50 campaign.

In May, Windermere Walla Walla held a cartoon-themed bowling night to raise money for the local YWCA, the Christian Aid Center, and Children’s Home Society. Agents, staff, and community members came dressed as cartoon characters of all kinds, which made for a colorful and lively scene at the local bowling alley. All in all, Walla Walla collected a whopping $10,000 to support the YWCA’s resources for local women in need, the Children’s Home Society’s child and family counseling, and the Christian Aid Center’s efforts to provide emergency shelter for the Walla Walla homeless population. 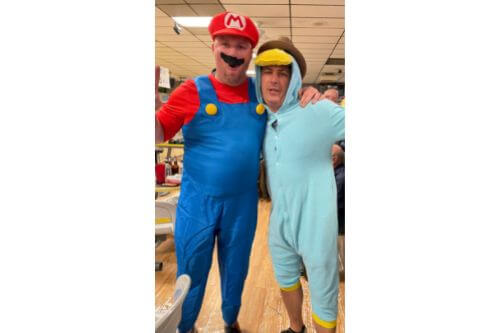 To learn more about the Windermere Foundation, visit windermerefoundation.com.

Related Articles
Windermere Community Advancing DEI: Windermere’s Continued Commitment to Change Written by: Samantha Enos – Vice President of Diversity, Equity, and Inclusion, Windermere Real Estate Since our company committed to affecting change with regards to diversity, equity, and inclusion (DEI) nearly two years ago, we’ve established several initiatives that have helped us move the needle toward making Windermere a more diverse organization and homeownership more equitable. Guided […]
Windermere Community Windermere Foundation Sets Sights on $50 Million in Total Donations In honor of Windermere’s 50th anniversary, the Windermere Foundation has set a goal to reach $50 million in total donations raised by the end of 2022. At the end of last year, the Foundation surpassed $46 million in total donations, leaving a nearly $4 million gap to eclipse the $50 million mark. Through the fundraising efforts of offices […]
Windermere Community Windermere Real Estate Celebrates 50th Anniversary In honor of our 50th anniversary, Windermere set a goal to reach $50 million in giving and officially announced our third generation of leadership during our 2022 Kick-Off event.  Seattle – On Wednesday, January 26, we hosted a virtual event for our agents, franchise owners, and staff, to kick off 2022 and celebrate our 50th anniversary. More […]